The S&P 500 rose 2.4 percent, its biggest one-day jump since June 2020, while the technology-heavy Nasdaq composite rose 3.1 percent. Friday’s gain snapped a three-day streak of losses and left the S&P 500 up 0.8 percent for the week, its first weekly gain this year.

The change in direction may have reflected:

It’s difficult to know which direction markets will go next; however, an asset manager cited by Nicholas Jasinski of Barron’s characterized the January drop as:

…a ‘garden variety technical correction,’ as opposed to a more pernicious cyclical downturn or systemic problem facing the market. Stocks aren’t falling because analysts are lowering profit forecasts en masse, or because economists are predicting a recession on the horizon. Instead, the correction has taken place because of how richly the market is valued.

Equity markets wrapped up a volatile week with a late-Friday surge that pushed the S&P 500 to a slight gain. Each day last week experienced a swing of at least 2.25%. Ongoing concerns about interest rates, inflation, valuations, and geopolitical challenges are contributing to swings in the market.

The Federal Reserve held rates steady while signaling a rate hike is likely in March. Fed Chair Jerome Powell’s press conference contributed to last week’s volatility. He indicated greater concern about inflation and didn’t rule out increasing rates by 0.5% in a single meeting or hiking more rapidly than the market expected.

The GDP report indicated the economy continued to rebound last quarter. U.S. GDP surged 6.9%, beating expectations for 5.3% growth. Most of the growth occurred as firms increased inventory depleted by supply chain challenges. Increased services spending also contributed to growth. Inflation remains a challenge as the personal consumption expenditures price deflator, excluding food and gas, rose 0.5% and is now up 4.9% in the last year.

The Federal Reserve deserves some credit for the volatility. As expected, the Fed announced “it will soon be appropriate to raise the target range for the federal funds rate.” That statement indicates the Fed plans to raise rates at its March meeting. The surprises came during Fed Chair Jerome Powell’s press conference. Investors have been concerned about how quickly the Fed would raise interest rates, and the market interpreted Powell’s comments to mean faster than expected. Investors now expect rate hikes in the next three meetings with a total of five increases this year. Powell didn’t rule out a 0.5% hike in a single meeting and indicated the Fed could reduce its balance sheet while raising rates. The Fed has historically only changed rates every other meeting, so the move to increase rates every meeting was a surprise. The pandemic, high inflation, and concerns about Russia’s intentions in Ukraine also affected markets.

Last week we detailed how higher rates can pressure markets and are a risk worth watching. Yet, recent history shows rate hikes have reduced expected market returns but not turned them negative. In the last four interest-rate-hiking cycles, the S&P 500 averaged an increase of 7.3% in the 12 months following the initial rate hike. It was higher in all four cycles. 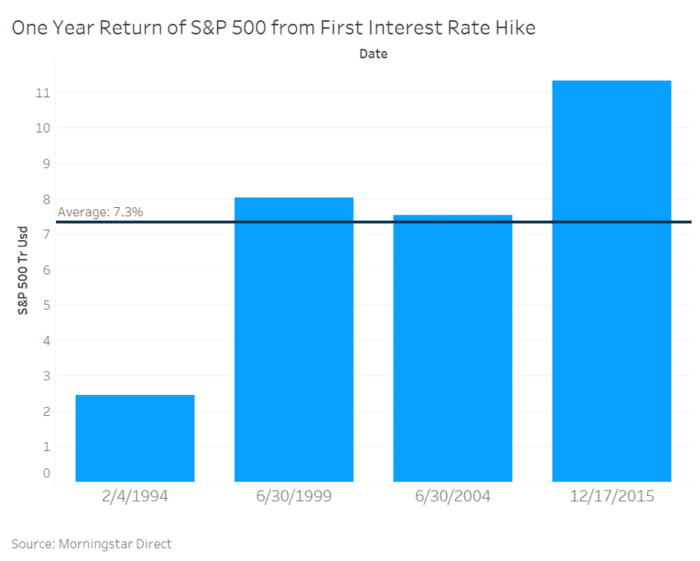 Even if the market does close in correction territory, it shouldn’t be viewed as a surprising market event. Corrections are normal; one has occurred in 22 of the last 42 years. In only eight of the 22 corrections did the S&P 500 drop more than 20%. In 13 of the 22 years with a correction, the market finished higher for the full calendar year. That means markets often bounce back from corrections quite quickly. Jumping out of the market when it starts moving lower can make it harder to reach your goals.

This dose of market volatility isn’t setting us back very far or doing grave damage to recently strong returns. Even with the decline the previous week, the S&P 500 is up 18.7% in the last 12 months. As shown in the graph below, the recent bottom on Thursday, Jan. 27, the S&P was only back to levels from October 5th. 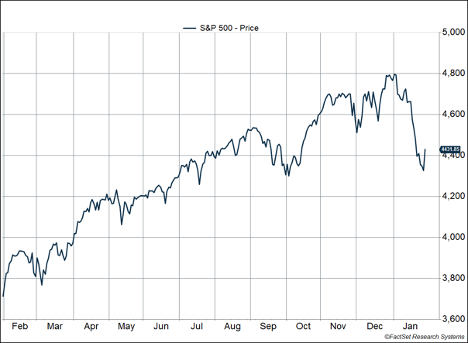 So far, we have focused on fundamental reasons for the decline. Most of the time fundamentals give a reason for markets to drop, but the behavior of market participants is also a likely contributor. As noted above, stock market performance has been quite strong in recent years, and some investors may be scaling back outsized stock positions or locking in gains in appreciated positions. Some of the intraday trading may be caused as much by a rash of selling pressure from nervous investors as anything else.

During periods of volatility, it is natural to feel a little nervous. Every decline is different, but we have been through similar situations. Some get worse, many get better quickly. One key is to not make rash decisions. If you are feeling concerned or have questions, reach out to your advisor.

What Do You Know About the Space Economy?

Space exploration is making a comeback.

Venture capital firms have begun to spend more than ever before on space companies. They invested $17.1 billion in 2021, up from $9.1 billion in 2020, reported Space Investment Quarterly. And the Bureau of Economic Analysis has begun developing statistics to measure the contributions of space-related industries to the U.S. economy.

On February 1, 1884, the first portion, or fascicle, of the Oxford English Dictionary (OED), which is considered the most comprehensive and accurate dictionary of the English language, was published. Today, the OED is the definitive authority on the meaning, pronunciation and history of over half a million English words, past and present.

Plans for the dictionary began in 1857 when members of London’s Philological Society, who believed there were no up-to-date, error-free English dictionaries available, decided to produce one that would cover all vocabulary from the Anglo-Saxon period (1150 A.D.) to the present. Conceived of as a four-volume, 6,400-page work, it was estimated the project would take 10 years to finish. In fact, it took over 40 years until the 125th and final fascicle was published in April 1928 and the full dictionary was complete–at over 400,000 words and phrases in 10 volumes–and published under the title A New English Dictionary on Historical Principles.

At 20 volumes weighing over 137 pounds, it would reportedly take one person 120 years to type all 59 million words in the OED.

A real patriot is the fellow who gets a parking ticket and rejoices that the system works.

It’s a sobering feeling to be up in space and realize that one’s safety factor was determined by the lowest bidder on a government contract.