Last year, everything seemed to shoot higher, from COVID-19 cases and vaccinations to economic growth and global stock markets. Everything except for optimism. As the year came to an end, a CBS News poll found that 40 percent of Americans felt 2021 was mostly filled with sadness, although almost three out of four people polled said they were hopeful for 2022.

2021 was a very happy year for U.S. stock investors. The S&P 500 finished the second year of a pandemic 28.7% higher than it started the year. Other countries did not do as well. The MSCI ACWI, which includes U.S. stocks, rose 18.5% in 2021, matching closely the 18.7% return of the Dow Jones Industrial Average. Those returns are still very impressive, but they lag behind the S&P 500. Bonds declined slightly. The Bloomberg U.S. Aggregate Bond Index slipped 1.5% last year.

Earnings are likely to have grown more than 45% in 2021, based on the first three quarters of results and estimates for the fourth quarter. The strong earnings growth allowed the price-to-earnings (P/E) ratio to drop in 2021 even though markets moved significantly higher. While valuations have declined, they remain above average and are being supported by low bond rates. 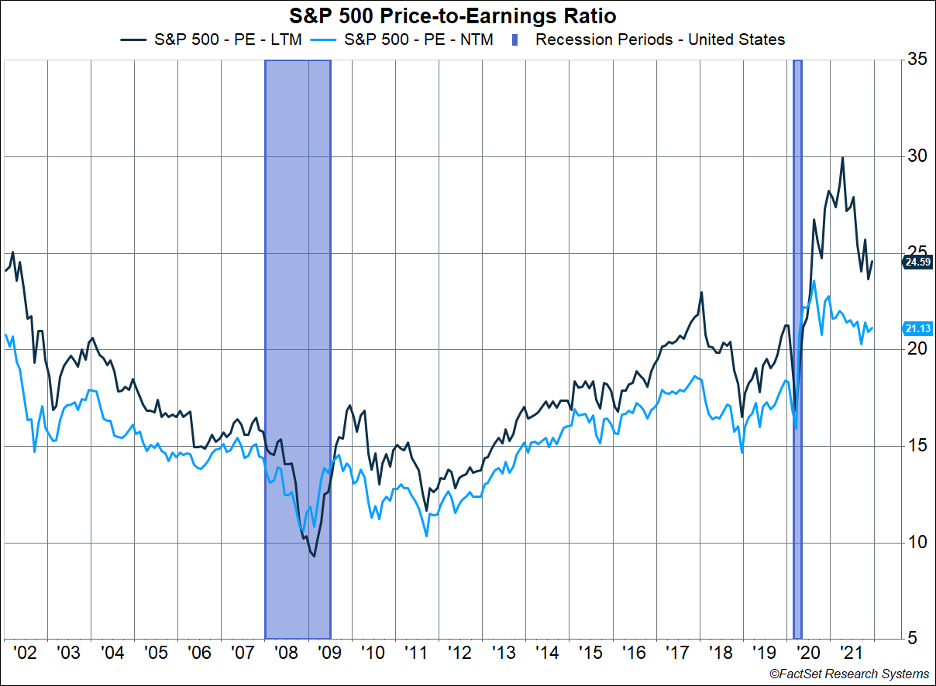 Moving back to fundamentals, industrial powerhouses Japan and South Korea reported strong bounces back in industrial production after having slowed in October. Strength in auto and semiconductor manufacturing boosted Japan to 7.2% growth and South Korea to 5.1% growth.

Why do people set New Year’s resolutions? Humans use auspicious dates, such as New Year’s or birthdays, to evaluate their lives and plan for next steps. Nothing stops us from setting our next big goals on August 10th, but those with birthdays on that day are much more likely to do so than the rest of us.

The downside of this approach is we start to lump time periods together based on the calendar and attribute more meaning to those periods than they deserve. A natural consequence is failing to notice major changes because the annual data obscure some underlying movement.

In this week’s update, we review three keys shifts from 2021 that will likely shape markets in the coming year.

The biggest shift occurred in interest rate policy. The supply shortages and government stimulus proved too much for supply structures, and the Fed turned hawkish as inflation rose. The first step was to begin reducing purchases of government bonds and mortgages. Once those extra purchases have tapered to zero, the Fed signaled it will likely move rates away from the near 0% rate it established shortly after the pandemic began.

China shifted away from a free-market approach for its most innovative companies and moved toward reining them in with more regulation. Those companies had made their founders and others very wealthy. But rather than embrace that growth, President Xi Jinping sought to reshape it with an emphasis on a broader distribution of wealth. The resultant risk for Chinese companies is one reason emerging markets finished lower last year.

Another example of the calendar giving the wrong impression comes from style box performance. “Small cap value” was the top performing style box in the Morningstar Style Box universe, rising 31.8% last year and beating out second place “large cap core,” which rose 29.3%. It would be logical to assume small cap value had some momentum going into 2022. But the truth is small cap value built up a big lead and then limped to the finish. In the first five months of the year, small cap value gained 31.5% and outperformed large core by more than 20%. For the last seven months small cap value barely moved while large core posted steady gains.

2021 will go down for most of us as the second year of the COVID-19 pandemic. As we enter the third year of wrestling with the virus, our focus will rightly be on managing life. Yet, some major shifts are occurring that may turn out to be very important this year, especially if COVID begins to fade.

On January 6, 1838, Samuel Morse’s telegraph system was demonstrated for the first time at the Speedwell Iron Works in Morristown, New Jersey. The telegraph, a device which used electric impulses to transmit encoded messages over a wire, would eventually revolutionize long-distance communication, reaching the height of its popularity in the 1920s and 1930s.

Morse spent several years developing a prototype and took on two partners, Leonard Gale and Alfred Vail, to help him. In 1838, he demonstrated his invention using Morse code, in which dots and dashes represented letters and numbers. In 1843, Morse finally convinced a skeptical Congress to fund the construction of the first telegraph line in the United States, from Washington, D.C., to Baltimore. In May 1844, Morse sent the first official telegram over the line, with the message: “What hath God wrought!”

For the next few years, private companies, using Morse’s patent, set up telegraph lines around the Northeast. In 1851, the New York and Mississippi Valley Printing Telegraph Company was founded; it would later change its name to Western Union. In 1861, Western Union finished the first transcontinental line across the United States. Five years later, the first successful permanent line across the Atlantic Ocean was constructed and by the end of the century telegraph systems were in place in Africa, Asia and Australia.

Over the course of the 20th century, telegraph messages were largely replaced by cheap long-distance phone service, faxes and email. Western Union delivered its final telegram in January 2006.

I can’t change the direction of the wind, but I can adjust my sails to always reach my destination.

Life is like riding a bicycle. To keep your balance, you must keep moving.