It’s widely recognized that people do not make perfect financial decisions. In fact, many investors rely on mental shortcuts when asked to make complex decisions. That may be why there are theories that correlate stock market performance to football, hemlines and sales of headache remedies.

For example, last week several articles about the U.S. stock market used the adage, “As goes January, so goes the year.” The saying describes the January Barometer, which holds that the performance of the Standard & Poor’s 500 Index in January has predictive value. According to this adage, if stocks gain in January, then the Index will gain over the full year. If stocks decline in January, then the Index will suffer losses over the full year.

The January Barometer, in fact, fails real-time tests at the 95 percent confidence level that statisticians often use when determining whether a pattern is genuine. Since 1972 its track record is indistinguishable from a random pattern.

You don’t have to look far to find flaws in the pattern.

In 2021, the Standard & Poor’s (S&P) 500 Index fell during the month of January and gained 26.8 percent over the full year. The same thing happened in 2020. The S&P 500 declined in January and finished the year with a gain of more than 16 percent. Please note that past performance is not indicative of future performance and past history may not be a guide to future performance.

The real takeaway from the past two years isn’t that the January Barometer is flawed, it’s that the U.S. economy, companies and financial markets have proven to be quite resilient.

Equity markets have given back some of last year’s gains. Higher interest rates, the persistence of inflation and the prospect of a decreasing balance sheet at the Federal Reserve, appear to be the causes. As the Federal Reserve prepares for its first meeting of the year, investors have raised the odds of four interest rate hikes to approximately 70% from less than 30% one month ago. Fed Chair Jerome Powell’s press conference after the meeting will likely be scrutinized for further guidance concerning interest rates. (Footnote, the Federal Reserve indicated that the first rate hike will occur in March).

Higher interest rates and prices seem to be slowing the housing market. Single family housing starts dipped 2.3%. Existing home sales also slowed and were down 4.6%. The median price of an existing home increased 15.8% last year. Record low inventory may have contributed to the decline in sales. Apartments may be the answer for some people. Multifamily starts jumped 13.7% offsetting the drop in single family housing starts.

Chinese retail sales increased only 1.7% versus expectations of 3.7%. The weak retail recovery in China can be attributed to sluggish restaurant spending, which dropped 2.2%. While Chinese consumers aren’t buying as much as expected, factories continue to produce goods for trade. Industrial production rose 4.3% in the last 12 months, and auto production was a positive driver for the first time since April.

The S&P 500 index dropped last week and is down for the year. Global stocks have held up a little better but are still down for the year. The Bloomberg U.S. Aggregate Bond Index was basically unchanged and is off 1.8% year-to-date. The Fed meeting heads the major economic and policy releases this week. 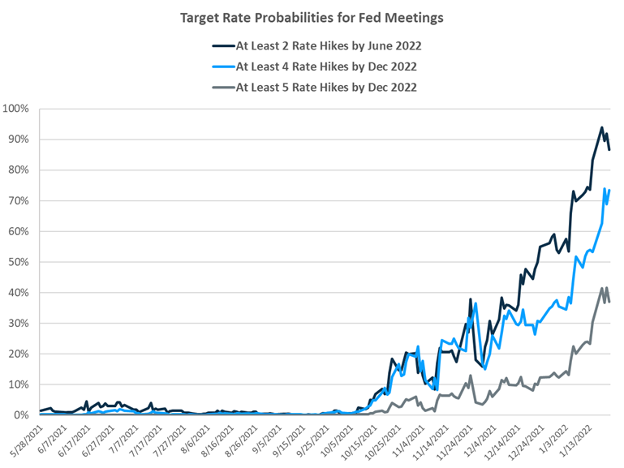 The market volatility we have been warning about finally surfaced last week. The losses have primarily been concentrated in growth stocks, which tend to grow more rapidly than value stocks and often trade with higher valuations.

Another challenge has been keeping up with earnings expectations. By the time firms finish reporting last year’s results, earnings will have likely increased more than 50%. But some companies were aided by large levels of government spending. Others benefited from people staying at home more often. Increased competition and pressure on margins may challenge future outlooks. In a market in which the S&P 500 has returned more than 16.5% per year for a decade, some stocks have high expectations that leave investors disappointed and prices lower.

What we are experiencing is not strange. Ten percent declines in the S&P 500 are a regular occurrence. Since 2000, the S&P has declined by more than 10% in nine years. On average, the S&P 500 drops 14% annually. Some years, like 2021, are much lower. Given that the Fed is pivoting its interest rate policy, uncertainty abroad with China and Russia, and the fact that we are in an election year means that higher volatility shouldn’t come as a big surprise.

Which Country is the Most Innovative?

The silver lining of the pandemic may be found in innovation, which has flourished as companies, economies and countries have adapted to difficult circumstances.

In 2021, the top-three innovative countries by income group were:

Filing season for 2021 income tax returns begins January 24, 2022, and while last year’s tax season led to many of its own difficulties as a result of COVID-19, this year faces its own set of challenges. As of December 2021, the IRS had a paper backlog of 10.3 million unprocessed returns, about 5 million pieces of taxpayer correspondence backdated to at least April, and remains understaffed.

For taxpayers, there are number of new complexities, including pandemic-relief programs such as the advance child tax credit and stimulus checks. The IRS is attempting to minimize any potential discrepancies by sending notices to taxpayers who receive these payments. Please provide your tax preparer with any notices received in regards to these payments.

On January 25, 1905, at the Premier Mine in Pretoria, South Africa, a 3,106-carat diamond was discovered during a routine inspection by the mine’s superintendent. Weighing 1.33 pounds, and christened the “Cullinan,” it was the largest diamond ever found.

The discovery was made by the mine’s superintendent, Frederick Wells, who then presented the diamond to Sir Thomas Cullinan, the owner of mine. Cullinan sold the diamond to the Transvaal provincial government, which was then given to Britain’s King Edward VII as a birthday gift. In order to avoid the diamond from being stolen on its way from Africa to London, Edward arranged to send a fake diamond aboard a steamer ship loaded with detectives as a diversionary tactic. While the decoy slowly made its way from Africa on the ship, the real diamond was sent to England in a plain box.

The diamond was cut by Joseph Asscher, head of the Asscher Diamond Company of Amsterdam. Asscher, who had cut the famous Excelsior Diamond, a 971-carat diamond found in 1893, studied the stone for six months before attempting the cut. On his first attempt, the steel blade broke, with no effect on the diamond. On the second attempt, the diamond shattered exactly as planned; Asscher then fainted from nervous exhaustion.

The Cullinan was later cut into nine large stones and about 100 smaller ones, valued at millions of dollars in total. The largest stone is called the “Star of Africa I,” or “Cullinan I,” and at 530 carats, it is the largest-cut fine-quality colorless diamond in the world. The second largest stone, the “Star of Africa II” or “Cullinan II,” is 317 carats. Both of these stones, as well as the “Cullinan III,” are on display in the Tower of London with Britain’s other crown jewels; the Cullinan I is mounted in the British Sovereign’s Royal Scepter, while the Cullinan II sits in the Imperial State Crown.

The future depends entirely on what each of us does every day; a movement is only people moving.