Why did stock markets in the United States finish the week lower?

The reality is that there often is no single answer to explain why stock markets move up or down. Each of the above may have contributed to last week’s downturn. There is currently tremendous uncertainty about the potential impact of Fed policy changes, war in Europe, and other issues. As a result, it’s possible markets will remain volatile in the weeks ahead.

Inflation continues to move sharply higher. The Consumer Price Index (CPI) rose 0.6% last month and is up 7.5% in the last 12 months. The annual gain is the highest since February 1982. Big gains in energy and food helped fuel the price hikes. Core CPI, which excludes food and energy, increased 0.6%.

Fourth quarter earnings continued the strong quarterly trend. S&P 500 earnings are expected to increase just more than 30%. If final earnings growth is above 30%, it will be the fourth straight quarter that earnings growth surpassed 30%. Some companies are experiencing tougher comparisons to previous quarters and the rapid growth they experienced during the pandemic.

The concerns about interest rates and Ukraine pressured markets, as the S&P 500 declined last week. The MSCI ACWI and Bloomberg U.S. Aggregate Bond Index both edged down as well. Russia’s intentions toward Ukraine will be watched closely. U.S. retail sales and a host of international inflation releases lead key news events this week. 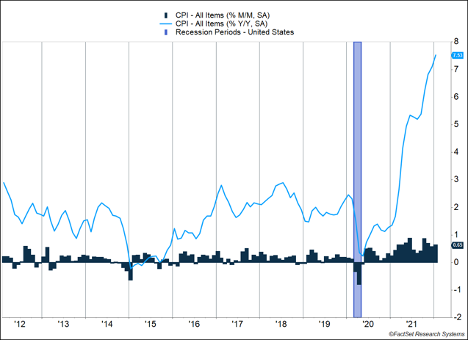 Diving into the inflation data shows some familiar themes. Energy prices continue to jump higher. Food prices have accelerated in recent months and matched energy’s 0.9% increase. The broad climb in prices across the economy caused core CPI to increase 0.6% as well. Continued rapid price increases in used cars are contributing to inflation. Used car prices rose 1.5% last month and have now jumped more than 40% in the last year.

Inflation isn’t just affecting consumers. Seventy-three percent of companies’ Q4 earnings calls have mentioned the word “inflation.” The average number of companies mentioning inflation over the past five years is 29%, so it’s obviously on the minds of corporate executives. What will be interesting to see is the degree to which companies are able to pass the higher costs they’re experiencing to customers.

A potential Russian invasion of Ukraine is a rapidly increasing risk factor. Russia’s 2014 incursion into Ukraine did not move markets much in the U.S., although European markets did experience a larger decline. The reaction to an attack is likely to be greater given the large scope and higher potential for human casualties. Russian stocks would also likely decline. If Russia invades, the severity and enforceability of any sanctions will be an important part of the market reaction. Based on the statements from the U.S. and European countries, NATO appears very unlikely to commit troops to the region.

When you were a kid, your parents probably told you to go outside and play. Your mom and dad may have just wanted to get you out from underfoot but, as it turns out, going outside is good for your mental and physical health.

In 2019, Mathew White of the European Centre for Environment and Human Health and his colleagues published an article in Nature. Their research found that people who spend more than two hours a week in nature “had consistently higher levels of both health and well-being” than those who spent less time in nature. The benefits of nature appear to max out at four hours.

The two-hour benchmark applied to men and women, to older and younger folks, to people from different ethnic backgrounds, occupational groups, socioeconomic levels and so on. Even people with long-term illnesses or disabilities benefited from time spent in nature—as long as it was at least 120 minutes per week.

The IRS is reminding taxpayers to be vigilant and watch out for IRS impersonation scams intended to trick them into providing their personal and financial information. Some of the schemes included text message, e-mail, and phone scams. The IRS also warns people to be aware of potential unemployment fraud.

If you receive an unsolicited text message claiming to be from the IRS or a program linked to the IRS, take a screenshot of the message and email it to phishing@irs.gov with the below information:

Please be aware that the IRS does not contact taxpayers by email to request personal or financial information. Most of the time, the IRS will contact taxpayers through regular mail delivered by the United States Postal Service. Similar to a potential text message scam, report the email to phishing@irs.gov by sending the suspicious email as an attachment.

The IRS (and its authorized private collection agencies) will never:

Organized crime rings have started using stolen identities to claim unemployment or other benefits for which the taxpayer never applied. Victims of unemployment identity theft may receive:

For information on necessary steps to take for suspected unemployment fraud, taxpayers can visit the U.S. Department of Labor’s fraud page here.

The IRS focuses on tax-related identity theft and suggested taxpayers take the below steps if they feel their Social Security number has been compromised:

If you have any questions about this information, please contact us.

The ancient Egyptians carefully preserved their pharaoh’s bodies after death, burying them in elaborate tombs containing rich treasures to accompany the rulers into the afterlife. In the 19th century, archeologists from all over the world flocked to Egypt, where they uncovered a number of these tombs. Many had long ago been broken into by robbers and stripped of their riches.

When Carter arrived in Egypt in 1891, he became convinced there was at least one undiscovered tomb, that of the little-known Tutankhamen, or King Tut, who lived around 1400 B.C. and died when he was still a teenager.

After years of searching, the wait finally paid off, when Carter’s team found steps hidden in the debris near the entrance of another tomb in November 1922. The steps led to an ancient sealed doorway bearing the name Tutankhamen. When Carter entered the tomb’s interior chambers on November 26, he was thrilled to find it virtually intact, with its treasures untouched after more than 3,000 years. The exploration began on the four rooms of the tomb, and on February 16, 1923, under the watchful eyes of a number of important officials, Carter opened the door to the last chamber.

Inside lay a sarcophagus with three coffins nested inside one another. The last coffin, made of solid gold, contained the mummified body of King Tut. Among the riches found in the tomb–golden shrines, jewelry, statues, a chariot, weapons, clothing–the perfectly preserved mummy was the most valuable, as it was the first one ever to be discovered. Despite rumors that a curse would befall anyone who disturbed the tomb, its treasures were carefully catalogued, removed and included in a famous traveling exhibition called the “Treasures of Tutankhamen.” The exhibition’s permanent home is the Egyptian Museum in Cairo.

A teacher affects eternity; he can never tell where his influence stops.